SARA envisoned a project that would assist the San Antonio and Bexar County leadership to decide where to commit their resources in an efficent manner for flooding events. This project aims to prepare an innovative computer model that simulates rainfall-runoff of all watersheds contributing to flooding in Bexar County during storm events. The 2-Dimesional model will eventually be updated with gauge adjusted NEXRAD to predict future flooding problems in Bexar County.

Floodace serves as a subconsultant for this project and incorpoates their Bexar Regional Watershed Modeling expertise to prepare rating curves for the watersheds of Upper San Antonio River, Leon Creek, Salado Creek, Cibolo Creek, and Medina River warersheds. Our historical local knowledge has also contributed in providing quality control and quality assistance for the project. Floodace also reviewed the resultant NEXRAD floodplain data from storms in 2013, 2015, and 2016 to provide comments about the accuracy of past innudiation maps to the larger team. 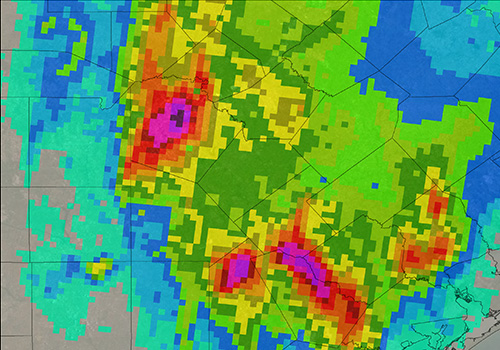 Floodace performed a 1D/2D model of a tributary to Brazos River to accurately define a complex flooding scenario involving multiple spills in a flat terrain. We used existing steady state HEC-RAS model to develop a 1D-2D model. The 1D-2D model consisted of several lateral structures, culvert connections within a 2D mesh, Flow hydrographs from HEC-HMS were used as input to the hydraulic model. The  existing hydraulic model was corrected with proper placement of cross sections to define the lateral structure. Flood depth maps were created along with maximum water surface elevations within the spill area. The resulting 1D-2D HEC-RAS model better defined the flooding risk for the client’s property. 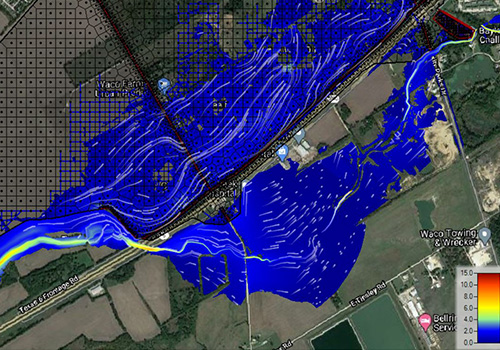 The overflow to Lacy Lakeview to the west of Highway 77 creates a very large floodplain west of the road. The flow into the parking lot reaches the backside of the Starbucks building but does not rise high enough to enter into the Starbucks building during the 100-year storm Floodace developed a new HEC-HMS model and directed his staff in the development of a HEC-RAS 2D model of the Diversion Ditch. Digital Elevation Models (DEMs) downloaded from TNRIS along with field survey cross sections was used for building the terrain. A mesh size of 50 feet by 50 feet for main the study area was used. Refinement reaches were added for the Diversion Ditch channels using a smaller mesh size for the channels. The results of the study were used in getting a LOMA approved from FEMA.

In September 2011, Bexar County was sued for property damages
from a localized flooding event from June 6, 2010, claiming liability from Bexar County. The property owner claimed that the flooding on the property occurred because of improvements done to Gillette road by Bexar County in years prior to the rainfall event that caused flooding. Mr. Sandrana served as an expert witness for this lawsuit by performing a forensic analysis of the June 6, 2010 storm event using Next-Generation Radar (NEXRAD) data. He extracted rainfall data for the watershed from a gridded precipitation dataset and performed flooding analysis of the actual storm using 2D modeling in XPSWMM. The analysis & animation of flooding performed by Mr. Sandrana helped Bexar County to successfully defend the lawsuit 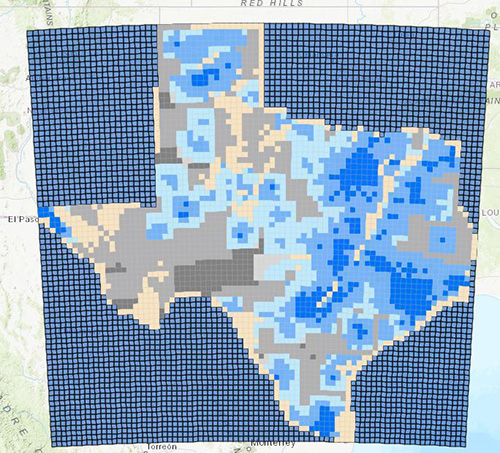 StoryMaps for Texas Water Development Board

The purpose of this project is to Survey the relative suitability of Texas’ 31 major and minor aquifers for ASR projects or aquifer recharge projects based on hydrogeological characteristics with a focus on storage potential, transmissivity, infiltration characteristics, storativity, recoverability, water quality, frequency, volume and distance from excess water available for potential storage. Floodace was part of the  sub-consultant  team to develop ESRI StoryMaps, Web Maps and Web Applications for public data display to allow the public to explore the hydrological parameters, excess water and water supply needs.

The Asset Management division at the City of San Antionio – the entity incharge of creating, maintaining, and tracking all projects for the 5-year Infrastructure Management Program (IMP) – was facing difficulty in managing the large amount of data generated through its systems. The IMP programs were managed in multiple Access database tables that used tables/feature classes in City’s enterprise GIS database (SQL Server/ SDE). Approximately 2000 new projects are generated every year and the asset management division was in search for a single solution that would increase their efficiency and satisfy their data management needs. Shiva Sandrana worked with City’s IT department tp develop a customized GIS web application to manage City’s IMP for Streets and Sidewalks either from the office or in the field through a mobile device. The web application significantly reduced the processing time from hours to few seconds for each project creation.

The City of San Antonio has nearly 700 miles of stormwater pipes and include portions which are approximated to be around a 100 years old. CCTV of underground stormsewers is an expensive undertaking, and the City has historically performed CCTV inspections in the older parts of San Antionio with plans to expand the CCTV operations to the other areas in the town.

Shiva Sandrana developed a strategy to prioritize capturing CCTV footage of stormwater pipes by developing a GIS based Master Plan. The Master Plan prioritized pipes based on risk of failure and criteria such as underlying expansive / corrosive soils, pipe age, pipe diameter, pipe material, proximity to major arterials & highways, proximity to major destinations and downtown areas. Based on these criteria and risk of failure, a score was assigned to each pipe.

The Master Plan established a framework for ranking storm sewers based on Likelihood of Failure (LOF) and Cosequence of Failure (COF) so expensive CCTV inspections can be performed in areas that are most likely to have defects, and proactive capital program can be planned for to address repair and lining of stormsewer pipes. 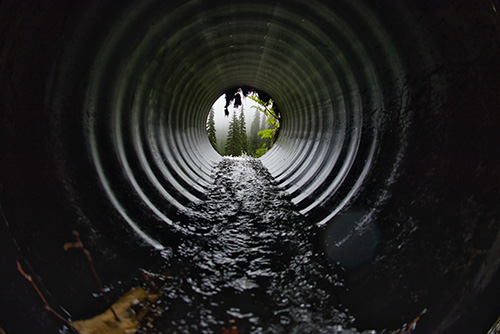 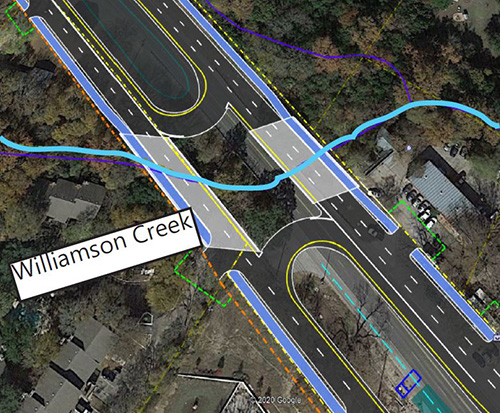 Floodace served as a sub consultant on the proposed TxDOT design built project on the $500 Million Oakhill Parkway in Southwest Austin.
Floodace analyzed the effect of TxDOT proposed regional detention ponds at US 71 and Old Bee Cave locations with new rainfall intensities anstd analyzed several alternatives to optimize the outlet structure to reduce flows within the project area. Floodace also designed the dam section including a stepped spilway structure and coordinated with the roadway design team to design placement of 126 inlets, 1.86 miles of stormsewers and bridge deck drains on main lanes and frontage roads using GEOPAK Drainage.

Floodace served as a subconsulant for this project and led the drainiage design to widen 7-miles of the highway near Waco, TX. We performed scour analysis and sized culvert crossing for the 14 tributaries using HEC-RAS. We also served as the key link across multiple disciplines which included Structural, Geotechnical, SUE, and Roadway Designers. Our work helped eliminate several low water corssings and increased public involvement & agency coordination. 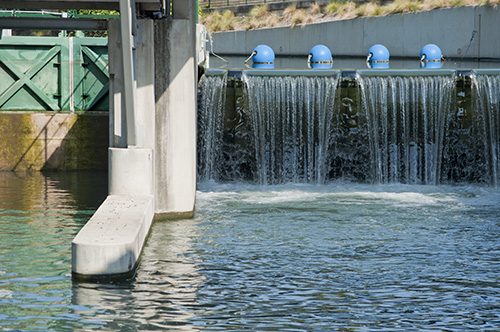 Floodace was contracted by the City of San Marcos to provide drainage expertise and comments of the Development Plans submitted to them for approval. Mr. Sandrana reviewed several dozen sets of drainage plans, HEC-RAS, HEC-HMS models during the review period that lasted from early April 2019 to late June of 2019. Mr. Sandrana provided initial plan reviews and some reviews of resubmitted plans after the City of San Marcos reviewed them. Reviews included detention pond calculations, Edwards Aquifer water quality submittals and FEMA plans to allow builders to fill floodplains.

As part of the University of Texas at San Antonio project team, Floodace gathered flood-related data for 9 counties to recognize flooding problems and aid in recovery from future flooding events. Participated in the preparation of the “Analysis of Coastal Floodplain Resiliency Data: An Investigation of Nine Counties in the Upper Texas Coast,” by researching and compiling data for the report and writing sections of the report which included the research. Floodace organized and participated in interviews of Orange, Jasper and Newton County drainage and elected officials to obtain data on problem areas. Documented Orange-County drainage needs after interviewing Orange County General Manager. Obtained flood-related information from Southeast Texas Regional Planning Commission. Participated in several stakeholder meetings organized in Beaumont – TX, and Newton County by the study group to present findings of the data collection effort and answer questions. Provided strategic input to collaboratively work on drainage issues between local entities. 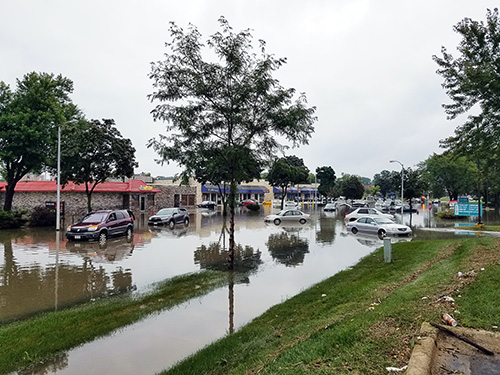